Search for Homes in Dilworth

Dilworth, Minnesota, is located in Clay County, outside of Moorhead.

It was originally named Richardson and was established as a station by the Northern Pacific Railroad in 1883. The name was changed from Richardson to Dilworth in honor of a railroad official Joseph Dilworth of Pittsburgh, who was also a coffee importer and direct

Dilworth is well known for its beautiful small town feel, good school district, restaurants and has all of the amenities of a larger community. One of the fun events in the summer is Loco Daze, a fun-filled weekend the end of July celebrating the community of Dilworth including large parade, variety shows, 5K run, adult and youth dances, various bands, spaghetti feeds, bingo and much more.

Well, there is no doubt that life in Dilworth is worth living, so if you want to move from the stress and life of big metropolitan cities while maintaining the same quality of life, it’s certainly THE RIGHT PLACE for you!!!

Search for Homes in Dilworth

Luxiourious one level home with no steps! The center of this home has a large kitchen with island that is open to the dining area, living room with stone fireplace and a ...

This gorgeous 2 story home has it all! The kitchen has been completely updated with quartz counter tops, backsplash, new kitchen aid appliances, including a double oven....

This well maintained 4 bedroom, 2 bath home in an established neighborhood is ready to welcome you. Patio doors from the dining area open to a maintenance free deck to ma...

This well-cared for, 1-owner home has all the space you've been looking for! 3 beds + office (could be 4th bed w/ addition of egress), 3 baths, 3-season sunroom, open kit...

Well maintained rambler with so much potential! The main floor features laminate flooring, family room, kitchen with plenty of cabinets, 3 bedrooms and a full bathroom. H...

Don't miss this one!! With a large corner lot and so much potential, this cute and spacious colonial style home is perfect for a first time home owner to make some equity... 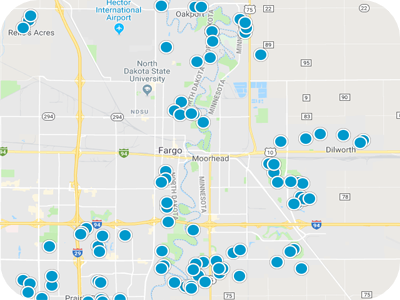